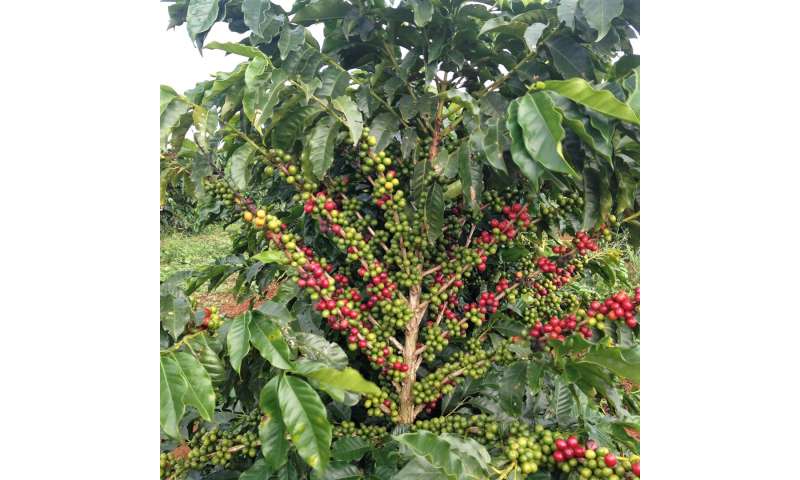 Each day, more than 2 billion cups of coffee are consumed worldwide.

Developing countries produce about 90% of the beans used to make all those lattes, espressos and mochas. That makes coffee a key source of revenue and livelihood for millions of people worldwide.

But coffee plants have up-and-down yield patterns. Years with high yields are often followed by years with low yields and vice-versa. This alternating pattern of high and low yields is called the “biennial effect”.

“It’s like physiological recovery,” says Indalécio Cunha Vieira Júnior. “Coffee plants need to ‘vegetate’ for a year to produce well the following year.” Cunha is a researcher at the Federal University of Lavras in Brazil.

In a new study, Cunha and colleagues outline a computational model that compensates for the biennial effect in coffee. This model reduces experimental error. It also increases the usefulness of data obtained from field trials. In turn, the model directly impacts the quality of coffee varieties supplied to farmers.

“Ultimately, our findings could reduce the cost and time to launch a new coffee variety into the market by half,” says Cunha.

The study also yielded some unexpected results. Researchers discovered that the biennial effect in coffee doesn’t follow a well-defined pattern, as previously thought.

“Many researchers assumed that all coffee plants in an area would have similar yield patterns,” says Cunha. But, researchers found that some coffee plants can have reasonably stable yields across years. Other plants may have high yields for two years and reduced yields in the third.

“These findings will change how coffee breeding experiments are analyzed,” says Cunha.

The new model also allows researchers to determine why individual coffee plants may have high or low yields each year.

“Our model enables us to delve deeper into the biennial effect,” says Cunha. “This could allow us to recommend the most productive varieties for farmers with higher accuracy and lower costs.”

Cunha and colleagues used a computer simulation to test the effectiveness of their model. “The simulation allowed us to confirm our findings on real data,” says Cunha. It also helped researchers test conditions in which the model performed well and when it ran into difficulties.

In general, “simulation results showed the model could effectively determine individual biennial stages,” says Cunha. The new model was shown to be an improvement over older models.

Cunha is now trying to incorporate more genetic information into the current model. This would allow researchers to study genetic control of the biennial effect. Understanding the genetic basis of the biennial effect could be very useful. For example, it might allow breeders to identify coffee varieties with more uniform yields across multiple years.

Half a Million American Minors Now Live in Mexico